To help end priests' pedophilia, do not miss "Deliver Us From Evil" 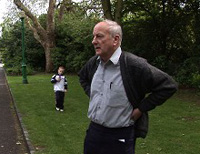 For "legal reasons", Lions Gate films were recently forced to remove the trailer for the documentary Deliver us from Evil from its website. Meanwhile the most famous pedophile priest portrayed in this movie is still living in freedom today (on the picture Oliver O’Grady in a public park in Ireland where he currently lives free within reach of children). How is it possible?

The number of pedophile priests being reported and indicted is continuously growing but for some unknown reason, the publicity has decreased and this excellent documentary isn't given the attention it deserves. How can society hope to cure this disease if it remains hidden?

Surely it is the responsibility of all people to force this discussion into public arena and Raelians across the US will be organizing rallies and protests in front of churches to make it more difficult for Catholic Church-goers to ignore any longer – and to finally stop the attacks on children.

Nopedo, an organization founded by Rael to help end these attacks on children, has witnessed many similar cases of cover-up. The Vatican's power pressured a Belgian court to shut down its site www.nopedo.org and fined the owner of the domain name $50,000 when he refused to shut it down. In 2003, the Swiss Catholic church sued NOPEDO for racial discrimination for reporting the truth in flyers, which was finally overturned by the higher court because, of course, NOPEDO was printing the truth.

Psychologists have observed that individuals deprived of sexual pleasure seek gratification through perverse and deviant means*. They have also found that pleasure systems in the brain must be properly rewarded as they are known to be essential for happiness and non-violent behavior. Abstinence and asceticism only lead to perversity and violence if it isn't supported by a higher consciousness aware of its physiological needs and on how they can dictate one's behavior.

This news item is from Raelianews
https://raelnews.org/to-help-end-priests-pedophilia%2C-do-not-miss-deliver-us-from-evil.html