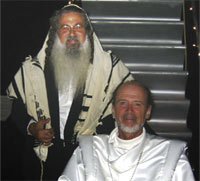 This news item is from Raelianews
https://raelnews.org/if-israel-wants-to-survive%2C-it-needs-a-jewish-gandhi-and-to-build-the-third-temple..html