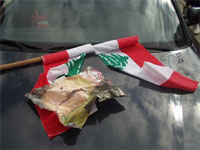 Following the recent stories of US, British and other European countries evacuating their citizens from war-torn Lebanon, the Prophet Rael sent the following comment:

"This mass evacuation of "foreigners" is shocking and pure apartheid.Those born somewhere else are worth evacuating but the poor innocent Lebanese nationals can stay and die...A truly humane international community would evacuate all civilians from Lebanon no matter what their nationality is and let Israelis , Hezbollah and Lebanese army fight freely.
The soldiers chose this job and fate , the innocent civilians did not. By evacuating only the foreigners , the "International community" is showing that the life of their "nationals" is more important than others. This is called apartheid."

This news item is from Raelianews
https://raelnews.org/evacuations-in-lebanon-benevolent-civilian-rescue-or-simple-apartheid.html