True Christian cannot be in favor of nuclear weapons 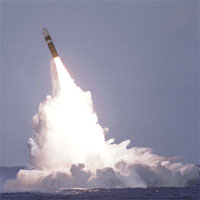 In a letter published in The Independent (UK) today, nineteen bishops have expressed their opposition to the replacement of Britain's nuclear weapons by the end of the year. They warned the Prime Minister Blair that the possession of Trident is "evil" and "profoundly anti-God". They also said: "The costs involved in the maintenance and replacement of Trident could be used to address pressing environmental concerns, the causes of terrorism, poverty and debt".
It is refreshing to see that sometime in the name of "god", some do something good...
The Prophet Rael said that a real "Christian" cannot be in favor of nuclear weapons. The very concept of weapons of mass destruction is absolutely "anti-Christian".
It is also so hypocritical and arrogant to ask other countries not to possess such weapons and at the same time decide to spend billions to renew one’s own arsenal with the most modern and powerful equipment.
The Raelian Movement gladly supports the decision of the nineteen bishops to voice their concern and use their authority for a more peaceful planet.

This news item is from Raelianews
https://raelnews.org/true-christian-cannot-be-in-favor-of-nuclear-weapons.html