The Right To Return 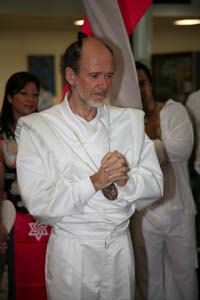 A text written today by the Prophet RAEL
Those who regularly read the articles that I select for RAEL-SCIENCE, particularly the Israeli Raelians or those of Jewish origin, might have sometimes wrongly thought that my support was for the Palestinians, suggesting that I was anti-zionist and therefore anti-IsRael. As if the Machiah could be anti-Israel!! or be against the country where he should return to build the Elohim’s Embassy.
You only need to read the messages to realise that there are no people more Zionist than the Raelians, since it is clearly written that the age of Apocalypse will have arrived when the people of IsRael find their country again. And the Machiah that I am is here to confirm the absolute Right that the Jewish people have today, whether they become Raelian or not, of returning to the Land of their ancestors as promised by the Elohim. But that does not mean the return should inflict unacceptable suffering to the people living in this region nor can it justify the theft of their houses or territories or the deportation of the inhabitants. The Israelis of Jewish origin, all the more because they are the people of the Elohim, have the sacred duty of never imposing on others the sufferings that they have been subjected to during the past millennia. It is their duty and should be their source of pride not to make others suffer what they have suffered themselves. The Jewish people’s sacred Right to return to their country should go hand in hand with the Palestinian refugees’ Right to return to their homes from which they were driven out of by the war.

This news item is from Raelianews
https://raelnews.org/the-right-to-return.html