A man of peace 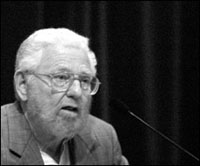 The Prophet Rael awards William Blum, author of "Rogue State, A Guide to the World's Only Superpower", the title of honorary Guide of the Raelian Movement.
Freelance journalist and activist, a former State Department employee, William Blum started his activist career in 1969 when he exposed the names and addresses of 212 CIA officials. Since then, Blum has authored a number of books and worked to expose government corruption.
Blum is the founder and editor of the Washington Free Press. He is also the author of a monthly newsletter called "The Anti-Empire Report".
Blum says that one of the greatest myths of U.S. foreign policy is that it has a noble objective. All U.S. activities overseas, he explained, can therefore be justified because the United States believes that it is working for the general good.


This news item is from Raelianews
https://raelnews.org/william-blum-honorary-guide-of-the-raelian-movement.html