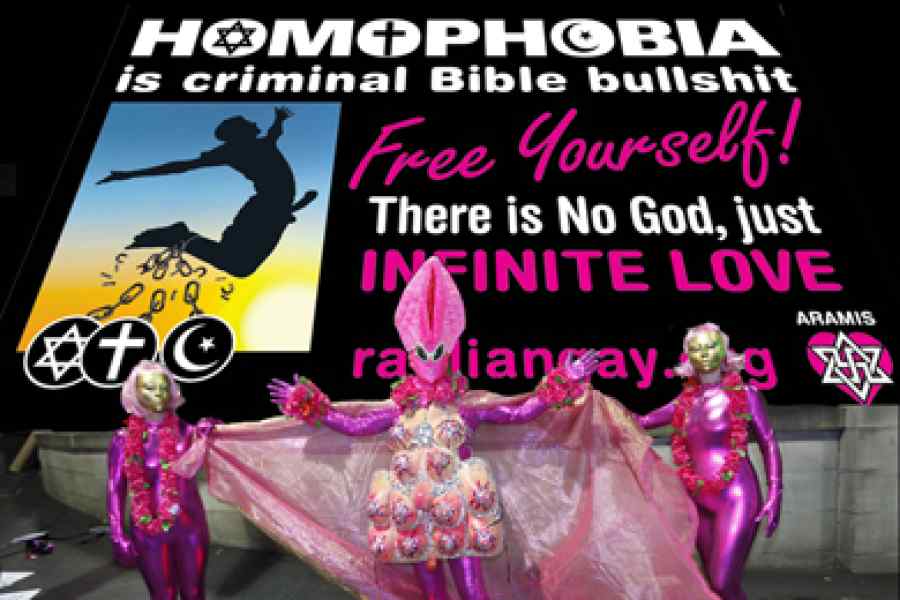 Dear Michael and Board,
Thank you Michael for your recent letter outlining the specific “What Mardi Gras won't do” and “What Mardi Gras will do” clauses, which are the reasons for rejecting the ARAMIS (Raelian Association of Religious Minorities) Expression of Interest in the Parade.
Admittedly the proposed slogan “HOMOPHOBIA is criminal Bible bullsh*t”, was also rejected last year, but the Raelian Movement had positively hoped that enough changes had taken place both inside Mardi Gras itself and the socio-political scene in Australia and internationally to highlight the salient need for free expression of GLBTQ communities’ concerns about religious homophobia.
Benedict XVI in his recent Christmas message once again condemned gay peoples and denounced same sex marriage as a manipulation of nature. He claimed homosexuality was destroying the very “essence of the human creature.” Whilst many people see the Pope of Rome as a joke these days he still has an unfortunate and powerful influence on opinion and decision-making. Ironically his supporters also seem to influence Mardi Gras, despite the pope’s slanderous, discriminating edicts against homosexuals and transgender peoples and the formation of a Royal Commission to investigate pedophilia within the Church.
According to the head of the Christian Lobby, the Australian Prime Minister, Julia Gillard recently assured religious groups they would have the ''freedom'' under a new rights bill to discriminate against homosexuals and others they deem sinners. The federal government is also proposing anti-discrimination laws that would leave transgender people vulnerable to discrimination.

“What Mardi Gras wont' do - Allow messages that discriminate or cause harm to others.”
The slogan Mardi Gras rejects only condemns passages of religious texts, unlike homophobic religions, which condemn countless individuals to lifetimes of trauma, misery and abuse and even foster the death penalty for GLBTQ peoples in some countries to this day.
“Homophobia is criminal Bible bullsh*t” doesn't imply that the Bible is all “bullsh*t”, it simply highlights that there are at least some parts which are obvious lies and deliberately misleading. The word bullshit is understood by most people to refer to a blatant lie, a flagrant untruth, an obvious fallacy, nonsense or exaggeration etc.
The Raelian religion also relies on key sections of the Bible, as well as sections of the Koran and many other religious scriptures in its philosophy. However we denounce homophobia in any form and particularly religious homophobia, which is so virulent, so blatant and based on misinterpretations and fear-mongering.
By combining the opposite values of love and homophobia, homophobic religions create toxic messages and mental conflict in impressionable minds. “Criminal Bible bullsh*t” is hardly an adequate term for the horrors homophobic religions inflict on the vulnerable to this day.
The separation of Church and State doesn't appear to exist in Australia. Should GLBTQ rights to speak out against persecution be held back so as not to offend bodies, which keep in step with religious homophobia?
“What Mardi Gras will do - Assess an Entrant based on its integrity and purpose in relation to the core values of the Parade.”
The International Raelian Movement positively affirms homosexuality, and transgender as natural and normal and actively promotes sexual liberation.
By questioning the integrity and purpose of the Raelian Movement in relation to the core values of the Parade, Mardi Gras begs the question of its own integrity and its current purpose. The original spirit of Mardi Gras is being lost and the revolutionary energy for much-needed change appears to have been hijacked by corporate funding and government interests. It seems Mardi Gras is losing sight of the core reasons, which had made the formation of the Mardi Gras protest and consequent Parade necessary in the first place.
In its 35th year it’s time to review not only the proposed name change, but also Mardi Gras itself. Is Mardi Gras still a full expression of Gay and Lesbian core values and concerns? Does it still have integrity and purpose in relation to the objectives of the original Parade? Is it censoring the expression of some serious GLBTQ concerns? Is it a national GLBTQ event celebrated by GLBTQ communities across the country, or is it to be simply a Sydney Mardi Gras event in a country where GLBTQ peoples remain freely targeted by religious bigotry and where same-sex marriage is outlawed?
Australia professes to treat its citizens equally, but equality doesn't exist here for gay, lesbian and transgender peoples. We feel Mardi Gras is muzzling our outcry to be free of religious persecution and discrimination and to have equal rights.
Mardi Gras was created for the sexual liberation of humanity. Lets keep it this way. Or rather make it a more efficient and a more powerful tool for change. It is the mission we, as GLBTQ communities, have entrusted to the Mardi Gras Board and we still have a long way to go to achieve true equality.
Sincerely,
Luke Roberts (aka Pope Alice)
ARAMIS Responsible Oceania
www.raeliangay.org