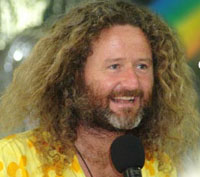 Peter Heaven, an Australian Raelian guide is reporting some actions he lead in Canberra a few weeks ago.
You may also listen to him on our radio at www.raelradio.net

A significant and monumental moment has been experienced by the seven Raelians who embarked on a journey to the nation’s capital to support our indigenous sisters and brothers on the 26th January, a date that is etched firmly into the minds of all the Aboriginal people of this land.
This day is proudly call "Australia Day" by the government and the majority of the population, all of whom live in either a state of denial or ignorance concerning the true significance of this day and the dark history it represents for our indigenous brethren. This date bears whiteness to the beginning of a bloody and ruthless take over of this land by the British colonizers and marks the commencement of a continuation of serious humane right’s abuses including attempted genocide of the Aboriginal people. To begin to list the long and deplorable record of crimes perpetrated against these beautiful people by both "State and Church" in detail could test ones harmony, but let me say that history will remember and one day soon the truth will emerge and the global family will be shocked at the deliberate brutality and intensity of crimes committed. 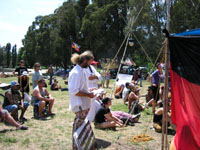 Our RAELian team had made the decision to travel to Canberra to officially offer the support of our beloved Prophet RAEL and that of the members of the International Raelian Community directly to the Elders and Ambassadors of the Aboriginal Tent Embassy who represent the many tribes of the greater Aboriginal Nation. The Aboriginal Tent Embassy has been in place since 1972 located in the memorial park directly outside the former Parliament House and consist of four main tents and marquees surrounded by approximately 20 smaller tents and camper vans acting as accommodation for the Embassy members and their supporters. It is a beautiful and satisfying sight complete with indigenous artworks, colorful flags, sacred fires and many banners of protest against the government. From the moment we arrived we felt the powerful vibe of peace and fraternity being generated by people having been brought together by a common cause of love, understanding and support.
Our team was all dressed in white and had brought with us a number of banners with slogans of support and action, which coupled with our smiles and love created quite a bit of attention. We had come to make an official offer to a number of the Indigenous Elders, in particular one of the leading ambassadors of the Embassy Isabelle Coe, who had been presented with the "Messages" 12 months before by our continental Guide Jean Francois. I had been in contact with Isabelle over the previous months and it seemed a fitting time and place to officially pass on the offer made by our beloved Prophet to fund a delegation of two Aboriginal leaders to attend the world court at the Hague, Belgium to officially file a complaint against the Catholic Church for its direct involvement of crimes perpetrated against the Indigenous people.
The Indigenous community call the 26th of January "Sovereignty Day" in recognition of the day when they will as a people reclaim their inherent right to sovereignty and self determination. It is a day of peaceful action and protest and all present understand the strength of passive action as exemplified in Gandhi's struggle for independence. This was in direct contrast to the thousands of patriotic citizens that had gathered across the lake from us in the shadow of the nations "War Memorial" celebrating Australia Day with military machines, 21 gun salutes and air force fly-overs, the vivid irony not being lost on those who exercise there consciousness.
All those present at the Aboriginal "Tent Embassy" gathered around a marquee that housed a public address system to listen to a number of very well articulated and passionate addresses by the Ambassadors and various Elders of the Aboriginal community. Our Raelian team had planned to speak with the Ambassadors after these presentations when we were given the opportunity to come up and speak directly with them and address the gathering officially. The opportunity was not lost and we began by partaking in a small act of recognition of cultural respect by offering the Elders a small parcel of soil from the land of the Bungelung and Araknul Nation, which is where our journey had begun. It was a beautiful moment of ELOHIMinization as we made publicly the offer of support and love from Raelians the world over to the Indigenous cause and the funding of legal action in Belgium for the Aboriginal people to seek compensation from the Vatican for well documented crimes against their people over the past two hundred years. There was much excitement, applause and appreciation from the gathered crowd and our offers were very enthusiastically accepted by the Ambassadors and Elders present. We also made mention of the fact that RAEL, a man of peace and on a very special mission for humanity may come to Australia in a few weeks. We asked the true custodians of this land for an official invitation, inviting RAEL to Australia. The grand council of Elders present met later in the day and unanimously voted on an official letter to invite the Prophet to Australia, this was a moving moment for us as the letter was signed by the Ambassador of the Aboriginal Embassy. Many people were asking questions about the Raelian Movement and how what they had witnessed on the day had changed their perception of Raelians very positively from what they had previously perceived about us from the media etc.
Also one woman approached us after we gave the speech and said that she had felt “guided” to be present that morning. She spent a couple of hours chatting with us all and then enthusiastically bought the "Messages" and made mention of her great wish to attend the up and coming awakening seminar of Oceania. So all in all it has been another wonderful day in the life of Raelians living in consciousness on this amazing and beautiful planet called Earth. From all the team "Down Under" we send fountains of "Love & Light" to all our sisters and brothers out there in Raelian Land. Happiness & Smiles, Pete :- )
You may also hear an interview of Pete on www.raelradio.net in the programme about indigenous people.