Nurses to be evaluated on their level of compassion

Should apply to government employees too 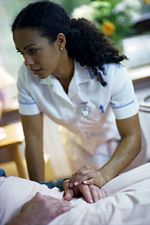 British Health Secretary Alan Johnson just stated that he wants the performance of every nursing team in England to be scored. He said he believes compassionate care was as important to the recovery of patients as the skills of surgeons.

Rael said “…this is a wonderful decision. This should also be applied to all government employees, including members of police and military. Love and compassion are the only way to replace the barbaric brutality triggered by George Bush and Tony Blair.”

The current atmosphere of violence, domination/submission has caused an upswing in violence ever since this war started, which is of course logical since young people in these countries are wrongly learning from adults that violence is useful and acceptable.

The Elohim recommended to Rael in 1973 that the worlds’ militaries be used as “keepers of the peace” instead of what they are now used as, keepers of war.