For his contribution to advancement of poor countries' education 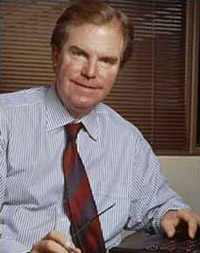 The Prophet RAEL has awarded today the title of Honorary Guide to Nicholas Negroponte.

Nicholas Negroponte, chairman and founder of the Massachusetts Institute of Technology Media Labs, has been outlining designs for a sub-$100 PC.

He said he is committed to the idea that children all over the world should be equipped with technology so that they can tap into the educational and communications benefits of the net. His non-profit “One Laptop Per Child” group plans to have up to 15 million machines in production within a year. Children in Brazil, China, Egypt, Thailand, and South Africa will be among the first to get the under-$100 computer.

The Prophet Rael sent today his personal congratulations for Nicholas Negroponte’s great job for the advancement of poor countries' education.