New Book - George Bush Could be Tried for Murder

George Bush Could be Tried for Murder 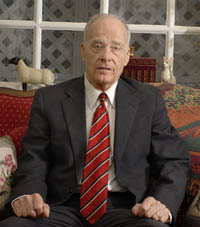 Vincent Bugliosi is a U.S. attorney with an immaculate record of murder convictions. 21 trials, 21 convictions. He has also penned several award winning books about such topics as the Kennedy assassination and Charles Manson. His latest book The Prosecution of George W. Bush for Murder builds a very compelling case that the US President should be tried for murder for his taking the U.S. into Iraq.

As you may have read on our press site or other interviews, the Prophet Rael has been saying this exact thing since 2003 when Bush first unleashed the U.S. military upon Iraq. In dozens of interviews in the last 5 years, Rael has pointed this out again and again. (see archived articles on this site)

There is something very interesting happening here regarding Bugliosi’s book, however. This award winning author is not being asked for interviews. Normally he receives dozens of interview requests after the release of any book. Why no requests? Because, and he knows it perfectly well, his book deals with a topic fiercely guarded by the powers-that-be. Bugliosi is quoted as saying “They are not responding at all. I think it all goes back to fear. If the liberal media would put me on national television, I think they’d fear that they would be savaged by the right wing. The left wing fears the right, but the right does not fear the left.”

Mr. Bugliosi hits one of the nails squarely on the head with this observation. Fear, fear, fear. No surprise that he had the foresight to write such a book! Fear is the most successful tactic and it has been used constantly by governments, churches and media throughout the ages – almost always with 100% success. The media are not responding to this great man’s book out of fear. It was also fear which manipulated the US population into allowing Bush to take the country into an illegal and immoral war thanks to fear of WMDs, of “terrorists” and other such lies and manipulations of facts. The fear of another attack like 9-11, mixed with a little manipulation of information, easily tricked the US public into supporting the murder of between 200,000 and 1,000,000 million innocent people – depending on which source you may wish to believe. (as we don’t want to distort facts ourselves) 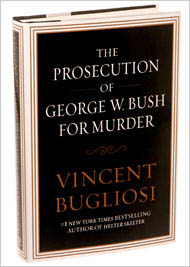 In other words, the very traps which the US population fell into are still very much in place. Fear of being “unpatriotic”, fear of those who our leaders say might attack us. In this case, Bush called the Iraq invasion a “pre-emptive strike”. This term is just another political play on words to avoid the real word, which was “attack”. The Bush war machine knew the public would not respond so favorably if they were told “I am your president and I want to attack Iraq. They had nothing to do with 9-11, nor do they have any weapons, but I still want to attack them.” As a result, politicians have to word things. Manipulate things – and the media almost always happily comply since they know there will be more viewers, more papers sold etc.
At the Nuremberg Trials after WWII, Hermann Goering, who was Hitler’s Reich-Marshall was of course questioned on many things. He said something which should be read on a daily basis by every single citizen of every country on Earth.

“Naturally, the common people don’t want war, but after all, it is the leaders of a country who determine the policy, and it is always a simple matter to drag people along whether it is a democracy, or a fascist dictatorship, or a parliament, or a communist dictatorship. Voice or no voice, the people can always be brought to the bidding of the leaders. This is easy. All you have to do is to tell them they are being attacked, and denounce the pacifists for lack of patriotism and exposing the country to danger. It works the same in every country.”


Lastly, as Raelians, we do not believe that any cause is worth the life of even one innocent person. Not even one innocent person. There are some very moving, compelling words on this matter toward the end of a book you can download for free right here on this site by the name of Intelligent Design. These particular words in the chapter referred to here are very powerful and tend to deeply touch even the staunchest supporter of war. But of course we recommend reading the entire book. ;-)