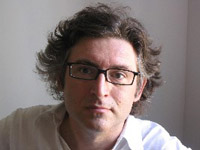 Michel Onfray, French philosopher, was awarded today the title of Honorary Guide of the Raelian Movement by the Prophet Rael.
To discover this philosopher, here are a few excerpts of his writings where you will see the similarities with the Raelian philosophy and Rael’s teachings:

"In front of any power that demands submission and sacrifices of all kinds, the task of the philosopher is to be disrespectful, mischievous, naughty, un-disciplined and un-submissive. Rebel and disobeying, although convinced that his task is desperate, he must incarnate the resistance against the Leviathan and his water carriers. With political matters, one must be impious and atheist.
(Michel Onfray / Cynismes / 2000)

"Too many Christian centuries have taught the women that they were nothing, less than nothing, the dregs of Humanity, with no soul, not worth any consideration, sinners, temptress and other bullshits.”
(Michel Onfray / La philosophie féroce / 2004)

"Monotheist religions share the same faith : life on earth is a fiction ; what counts is a back-world full of creatures that make fairy tales look very pale – a god who sees everything, a bearded man who splits the sea in two, a virgin who gives birth, a dead man who resurrects, a prophet who hates ham ; the body is a punishment ; a woman is a catastrophe ; to give birth is a necessity to perpetuate a negativity under which name we are castrated…”

"Monotheisms also hate the individuals who don’t sacrifice to the same god as theirs. Untolerant, jealous, exclusive, arrogant, proud, dominant, they dictate laws for others. Hence their being accomplice with the warriors, soldiers, military people of all kinds.
(Michel Onfray / La philosophie féroce / 2004)


"Each time I wished to exchange a few words with a back-world seller, whether they were Jewish, Christian or Muslim – they sell the same mats – I only met people who had a good memory but who, most of the time, put their intelligence under the bushel…. Memories of the commonplaces told and written in the flesh of their childhood; and refusal to think so that they can nurture their illusions.”
(Michel Onfray / / La philosophie féroce / 2004)

"Considering the world situation, the emergency to me seems the teaching of atheism!” (Michel Onfray / La philosophie féroce / 2004)


"The three monotheisms – I really mean the three of them – fundamentally teach the same hatred towards women, desires, pulsions, passions, sensuality and freedom, all freedoms. Let’s not get excited over the importance or not to teach religions in school, the emergency is the teaching of atheism."
(Michel Onfray)

"By not being lazy, one sacrifices fully to social requirements."
(Michel Onfray)

"The future of each one of us lies in one’s will and one’s resistance against what people want one to be socially, excluding any other destinies".
(Michel Onfray)

"The life of every day, the use of one’s body and one’s own time, the use of pleasures and of self-techniques, here is the ground for a philosophical quest".
(Michel Onfray )

"The best success of a dandy is the way he uses his own time and not his money. He despises the gold in which middle-class people stagnate: his master piece is his freedom, the acquisition of his freedom."
(Michel Onfray)