Memorial for Gays in Germany is a good a first step ...but ...

what about one for the Jehovah Witnesses? 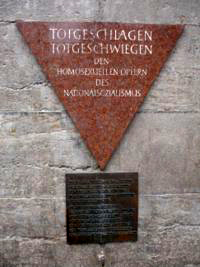 Germany just finished a memorial which honors the thousands of homosexuals who were persecuted by the Nazis between 1933 and 1945. The new memorial was inaugurated by Berlin's gay mayor, Klaus Wowereit and Germany's Culture Minister, Bernd Neumann. It is even located close to the memorial for the six million victims of the Holocaust.

With his usual clarity, the Prophet Rael noticed something very interesting in Mr. Wowereit, words when Wowereit said: “This is symptomatic for a society... that did not abolish unjust verdicts, but partially continued to implement them; a society which did not acknowledge a group of people as victims, only because they chose another way of life.”

RAEL commented, “In a world where Gays are still prosecuted so much, Germany’s gesture to create this memorial to the Gays who were persecuted and killed is good and deserved, to say the least.”

RAEL explained further. “What would be even better would be for Germany to also create a memorial for the Jehovah's witnesses killed by the Nazis in order to show the similarities between Hitler policies and the anti religious minority policies and actions which are still today very much in place in France, Jehovah's Witnesses being on the "dangerous cult" list of the French assembly and by state sponsored ADFI and government MIVILUDES.”

RAEL finally added “It would also be another step in the right direction since Germany itself also participates in anti-religious discrimination since it has also discriminated against religious minorities, the most well known example being Scientology.”