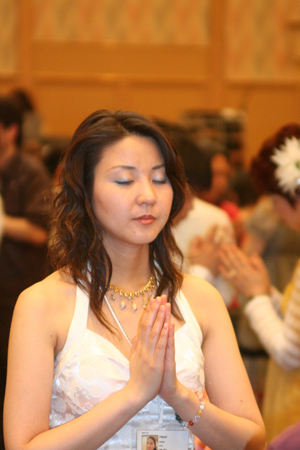 It's ancient wisdom that the practice of meditation transforms us to better health and a happier life. Our Creators in their message to Rael - and to us all through him- reinforced that teaching and explained that it is indeed vital for human being to meditate. They also explained that the effect of meditation has nothing mystical as some old religions tend to teach but it is a tool given to us by those who created us, that allows to balance our mind and body so that every one of our cells develop in a harmonious environment leading to a better defense system against diseases.
A few years ago, scientists have started to consider and measure the effects of meditation and we have seen a few scientific studies illustrating its benefits.
In one study scientists discovered meditation ameliorates the negative traits associated with migraine headaches and decreases anxiety. In this study those who practiced meditation also had greater increases in pain tolerance and expressed a greater existential well being.
In another study it was found that cancer patients who undergo stem cell transplantation were better able to cope with the physical and emotional stresses of the procedure if they followed a regiment of mindful meditation.
In a third study, rheumatoid arthritis patients with recurrent depression were found to benefit the most from meditation across several measures, including coping with pain and joint tenderness.
An important study made at Stanford University is going to be published next month in the Journal of Clinical Psychology where investigators relate that patients with long-term depressive disorders experienced the most remission in their depression if they meditated. Other studies reporting similar findings are also included in the references listed below and many Raelians could confirm how meditations help them to overcome their depressive state.

Interestingly some studies have shown that antidepressant drugs can also fight illness. Antidepressant drugs may help the immune system fight serious illness, a research published by Dr Dwight Evans of the University of Pennsylvania states. Evans suggests that these drugs enhance the activity of natural killer cells (NK cells), key elements of the immune system, and could help the body combat infections such as HIV, and even cancer.
What his study actually reveals is that depression impairs NK cell function and accelerates the progress of HIV/Aids. He also explains that the serotonin release and uptake following the use of anti-depressant drugs is probably the key to having active NK cells back.
Rael reminded us following this publication that we don’t need anti-depressant drugs to have higher level of serotonin. "With the practice of meditation it's exactly the same, but without the drugs’ side effects” . Rael also stated that meditation is the best way to fight stress and depression.
To know more about the sensual meditation taught by Rael for the past 34 years you may read his book ‘Sensual Meditation’ available for download and/or join one of his annual week seminars where he not only guides you through the meditation practice but also demystify every aspect of it. Raelians don’t talk about chakra, but if you come at one of their seminars, you will definitely be more familiar with your NK cells :-)
References


The Physical and Psychological Effects of Meditation,


"I Felt Like a New Person." The Effects of Mindfulness Meditation on Older Adults With Chronic Pain: Qualitative Narrative Analysis of Diary Entries.
J Pain. 2008 Jun 10.


Comparison of cognitive behavioral and mindfulness meditation
interventions on adaptation to rheumatoid arthritis for patients with
and without history of recurrent depression.
J Consult Clin Psychol. 2008 Jun;76(3):408-21.