Man Trying to Sell His Soul 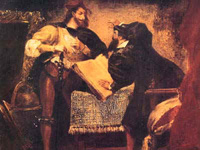 A New Zealand man is auctioning his soul in an internet auction. So far it’s hit $189US but still has not closed yet.

An attorney said that the winning bidder would not be entitled to anything but Scott's soul and would not be able to own or control him in any way.

The winning bidder will probably want its money back when science soon proves there is no such thing as a soul. ;-)... unless it is a religious organization tying to increase the number in its rank?

Anyway, it definitely falls into the "False Advertising" category to us:-)