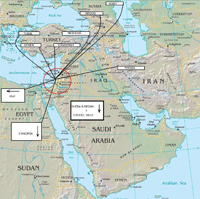 The International Atomic Energy Agency convened earlier this week in Vienna, Austria which, among several points to be addressed was nuclear programs in the Mideast. It has been assumed for decades that Israel possesses nuclear weapons, making them. Since they are the only Mideast nation to possess nukes, the topic even being raised was an indirect criticism of Israel’s nuclear policy. The meeting consisted of 145 nations and voted for a resolution urging all nations to open their nuclear activities to outside inspection and work toward the establishment of a Mideast nuclear weapons free zone, which Israel has thus far refused.

Being the only nuclear power in the Mideast, it’s not hard to understand why the Iranian delegate to the meeting said Israel's nuclear capabilities represent a "serious and continued threat to the security of neighboring and other states." He additionally criticized the United States and other Western supporters of Israel for their "shameful silence" on Israel's atomic arsenal.

Rael agreed when he said “…with such a double standard, no one should be surprised that most Muslim nations are anti-American and anti-European. The US and Europe are saying that it is ok that they and Israel have nuclear weapons but no one else. If the roles were reversed we can be very sure they would feel differently.”

Many Americans and Europeans are always asking themselves “Why do some of the Muslims hate us”. Maybe it’s fear, not hate.

There is, however, some good news coming from this meeting. There was a big difference in the vote last year compared to the vote this year, showing that opinions are really changing. This week, delegations had so far voted 82-0 for establishing the Mideast nuclear weapons free zone, with Israel, Syria and the U.S. among those abstaining. Last year it was 53 in favor, the U.S. and Israel against, and 47 abstentions. That’s a step in the right direction and it’s great that more countries are starting to put pressure on the countries which have nukes but don’t want others to have them. Is it one step closer to total disarmament? It could be – and we hope so.