this is the definition of terrorrism 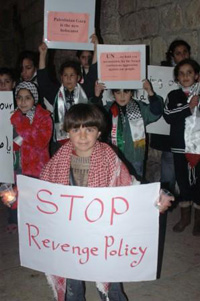 The Prophet Rael commented with beautiful clarity following the news that the Israeli military were stopping U.N. shipments of fuel from reaching Gaza City. Israel closed its border because of the rocket attacks from the Gaza area. There will be no electricity, no heat, and if things continue another day, no food coming in for 750,000 people.

Rael said “In other words Israel is saying ‘Let children and women starve to death to punish them for the actions of fanatic militants’. This is called collective punishment and is forbidden by all international laws and treaties as well as the Geneva Convention. It is similar to the war crimes of German Nazis punishing collectively civilian populations for the actions of freedom fighters. And it will just increase the hatred instead of appeasing all parties. Only love can save Israel.”

At the risk of diluting such a clear statement, we should be clear here. We are not defending the actions of these fanatical Palestinians. Firing rockets indiscriminately into Israel is despicable. We should remember, however, that the definition of terrorism is when a country uses force against a civilian population in order to persuade the leaders to change something. This is exactly what Israel is doing but Hamas leaders cannot be held responsible for a few Palestinian fanatics. Israeli leaders can, however, be held accountable for their military. As of now, both sides are terrorists in the purest sense of the word. And as Rael says, the powerful Israeli military choking the civilian Palestinian population will only make things worse.