as long as others do it as well 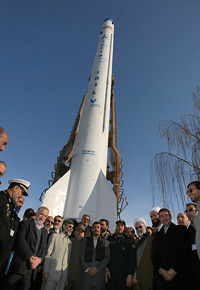 Iran has recently launched a research rocket to inaugurate a newly built space centre. The test-launch for the country's first low-orbit research satellite was shown on Iranian state television. Western powers expressed their concern, and the White House called the launch "unfortunate", warning it would further isolate Iran from the global community.

If the global community in its majority has the capacity to launch satellites like Iran just did, shouldn’t it be logical to say that the Iranian launch is bringing Iran closer to the global community? Why would such an achievement isolate them form the world?
The BBC says that “Reporting of the story on Iranian TV has been accompanied by a great deal of patriotic music.” Now, let’s remember when other countries achieved similar endeavors, as an example, when the US landed on the moon, did they display the flag of the World? Was there some kind of competition at the time and lots of nationalism involved???
Rael released a statement today calling for a fair treatment of this successful launch.

“ This is wonderful news. It is necessary that the Western Nations' world supremacy ends; especially the US one that is based on military domination due to spy satellites. Every nation has the right to explore space, and use this technology against brutal imperialistic military invasions. The same goes for nuclear bombs : as long as the US and other Western countries are allowed to have huge stockpiles of nuclear weapons, all countries of the World are entitled to have it too. The non-proliferation treaty is just a way to say : " we can have it because we want absolute domination of the world and you can't".
This hypocrisy must end. Destroying all nuclear weapons should be a priority, but it must start with those who have the largest stockpiles, then they can require others not to have them... Not only do Western nations have huge stockpiles of thousands of atomic bombs but they continue to develop and build new generations of more deadly nuclear weapons while frightening the World against other countries that are trying to have their first little bomb ... If you have 100 guns in your home you cannot try to force your neighbor not to have one...”