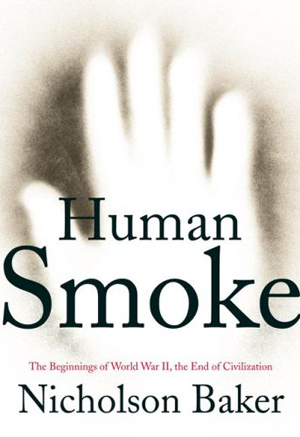 Nicholson Baker is a U.S. novelist and has just released a nonfiction work titled "Human Smoke" (referring to the crematoriums on the concentration camps) which questions the moral justification of the one war which even many war critics feel was justified. The heated debate has started while readers follow how Baker indicates that Winston Churchill and Franklin Roosevelt share blame with Adolf Hitler in setting the stage for the deadliest and most destructive war in history. Baker proposed "If this is the war that everyone holds up as the benchmark of a morally justified war, let's look very closely at how it began, let's find out what happened, in what order and where the moments were that things could have turned out differently.”

Raelians would agree. If we are to learn from the past this should be done very carefully.
Over the years of his research, Baker discovered a succession of newspaper articles which he placed in chronological order which have ended up painting a very different picture of the world stage in the years leading up to the war than what is taught in any school history class. Among other things, he contends that Churchill responded to Hitler's attacks on Poland and other neighboring states by launching a relentless bombing campaign against German cities as well as a blockade that was designed to starve the enemy into submission. (That sounds like the first Iraq war, doesn’t it? It didn’t work then, either. It only made innocent people suffer)

Baker also said in an interview that “Churchill was acting like a bloodthirsty maniac during that period and that this fact should go back on the record in all its unpleasantness. We can't learn from a hero like that. It's a mistake to say that because Hitler was bad, we have to clean up the image of Churchill. Churchill was also bad".

Rael was very happy to see the release of this book and said it was fantastic and courageous to publish it. He commented that the same exact thing applies to the US blockade of Japanese oil which led to Pearl Harbor and Hiroshima.”

Any scholar will agree that history is written by the winners of the wars. It’s been this way for thousands of years. The release of this book is further proof that it is very difficult to rewrite the history books which are always biased and glorify certain attackers while demonizing other attackers. All attackers are wrong. All attackers are wrong. Yes, we said it twice.  This black and white “demonization” has always lead to more bloodshed because it is based in fear, not love. Maybe you have seen other articles on this site where we remind the reader of this ignored fact.
Baker also pointed out something eerily familiar in the world today which shows that it is always a mistake to respond to violence with violence. It’s true in any conflict but nowhere is this clearer than in the Middle East situation today when Baker insists that “Churchill's very aggressive actions and Roosevelt’s to supply Britain with ships and planes served only to prop up Hitler's standing with Germans and strengthen his hold on the country.” This is exactly what we have seen in the illegal war in Iraq. The very day Bush ordered the attacks on Iraq, Rael said such attacks would only serve to create an exponential number of “terrorists”, who consider themselves freedom fighters against the invaders. Of course this is the situation today.

This point should also remind of us of the very reason Bin Laden used to “justify” the 9-11 attacks? As we say, all attackers are in the wrong, but we should not ignore what Bin Laden said that it is not fair that the US help Israel, supplying money, planes, bombs etc. against the Palestinians. Because of this, millions in the Arab world have rallied against Israel and the US in greater numbers than ever before. If Bush would have helped the suffering Palestinians, who also have the right to their own territory, things would be very different today.

As Rael pointed out immediately following 9-11, “every attacker has his good reasons. The men who flew the airplanes into buildings had very good reasons to do so. Then the US attacked Afghanistan with very good reason. But reason is almost always wrong. Only love is right.”

There are many articles on this site which illustrate that violence is never, ever a lasting solution. We invite you to peruse these and feel free to send us your comments. :-)