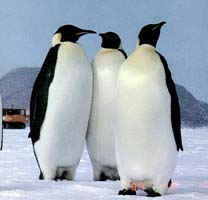 A German zoo's team tried to tempt its 6 gay penguins to go straight by importing
more females from Sweden but the six homosexual penguins showed no interest in their new female companions and remained between each other. Zoo Director Heike Kueck said that the relationships were apparently too strong and they will try again later.
Homosexuality is genetic for humans as well as for animals. To bring females every spring won’t change anything. It is like attempting to change the color of one’s eyes