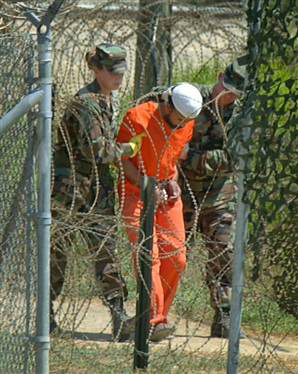 The U.S. Defense Department has just estimated that more than 60 prisoners released from Guantanamo Bay have joined the ranks of the fighting. It is of course assumed that these men were, at least on some level, thought to be innocent after all since the US is not in the habit of releasing those found guilty, right?

The Prophet Rael commented: “Is it so surprising that many innocent young people imprisoned illegally for 6 or 7 years without a trial, daily tortured, abused, and traumatized forever, and released without any money for damages, would then, out of revenge, join the ranks of "terrorists"? If they had not been illegally detained, they would never have done such a thing and would continue to be peaceful citizens. Illegal imprisonment of innocent people is creating potential terrorists, as well as invasion and genocides like in Gaza. Only love can save the world.”

Since day one when Mr. Bush started this illegal and unethical war, Rael reminded him and the rest of the world that only listening and compassion can be the lasting solution to any conflict. Even the Bible in which Mr. Bush claims to believe quotes Jesus as saying “if you are struck, offer the other cheek” as well as “love thy enemies”. George did neither. It’s time to turn the page and it’s great that Mr. Obama on his first day in office signed the orders to start closing Guantanamo. So far, Mr. Obama seems to understand that one should not compromise their values in order to “win” at any price. Hopefully the pendulum will swing even harder toward love and understanding instead of “might makes right” because as Rael said, only love can save the world. Only love. And it starts with each of us loving those who are very different than us. It’s so easy to love those who are similar to us – and that’s more narcissism than it is love. To love, as other great Prophets reminded humanity, to love those who are different than us, especially those who even hate us. Only this can save the world. Thank you Rael for this constant and loving reminder. :-)