From Homo Emotionalis to Homo Sapiens

Humans are literally governed by their emotions 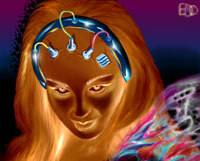 Humans are literally governed by emotions, this is what Jules Lobel, a Pitt professor of law, and George Loewenstein, professor of economics, explained in an article published in the Chicago-Kent Law Review. These scholars from Carnegie Mellon University and the University of Pittsburgh, School of Law, say that the emotional responses that guide much of human behavior have a tremendous impact on public policy and international affairs, prompting government officials to make decisions in response to a crisis--such as the Sept. 11 terrorist attacks--with little regard to the long-term consequences, exploiting emotions for their own end.
The understanding of the way emotions dictate our life has been a big part of the teaching of the Prophet Rael for the last 30 years.

Here are the comments he made today regarding this publication:
This is exactly what I have been teaching for the last 30 years... in fact we are more “homo emotionalis” than “homo sapiens” which means wisdom. And our job is to accelerate the metamorphosis from “homo emotionalis” to “homo sapiens”...or we will disappear in a self destruction triggered by "enthusiastic" negative emotions. Patriotism, racial, religious or sexual intolerance are all rooted in negative emotions. And criminal leaders from politics or religions are using it to get more power. But the worst of all are the media and journalists who use it only to make more money, inciting emotional hatred, triggering wars and genocides.
One more time, without the media, criminal politicians like Bush and Blair, or religious fanatics have no power to manipulate the public in order to spread like a pan demy negative emotional reactions. After September 11, 25 % of Americans, in some areas, were in favor of sending nuclear bombs on Afghanistan. A sticker was sold about it in large number and put on American cars, and 80 % of Americans believed wrongly that Iraq was connected with this handful of terrorists justifying the criminal invasion of a sovereign country. Now Bush and Blair are trying, delivering other lies, to create another "positive" emotion, justifying the illegal occupation by claiming wrongly that it's "for promoting democracy" and "serving as model for the whole Middle East". Colonialism was filled exactly with the same lie of "positive emotion", claiming that it was to bring to "African savages" the benefit of Christian civilization...Then invaders , torturers and “slaverers” were thrilled by the emotion of doing something good for their victims.
Exactly the same also for Nazi criminals who really believed that they were helping humanity by protecting it from the Jewish people...
And nowadays the same negative emotion is used against religious minorities called "cults" or "sects", mostly by the main propagators and “triggerers” of negative emotions : the media and journalists. The fact that religion specialists, theology teachers, sociologists, psychologists and others scholars explain clearly that religious minorities called cults or sects deserve as much respect as large dominant religions doesn't matter. What matter is that negative articles about them sell more papers and create a higher audience. So the media and journalists mafia use it and manipulate the public to create more hatred.
Thankfully Julius Streicher , chief editor of the most important German newspaper was condemned to death at the Nuremberg trial, without killing or hurting anybody himself, but only by inciting hatred by his anti-Semitic articles during the Nazi era.
Let's hope that today judges apply the same rules before members of "cults" or "sects" are killed by people filled by hatred by the media. If not, if they wait until such a crime occurs, then the condemnation will again have to be as harsh as for Julius Streicher. Today media and journalists should think about it before it happens: if one day members of a "sect "or "cult" are killed by people motivated by the negative emotions instilled in them by the media and journalists, they will have to be prosecuted criminally as well as Streicher for inciting indirectly sensitive people to commit this crime by playing on their negative emotions.