US creates these terrorists in its torture camps 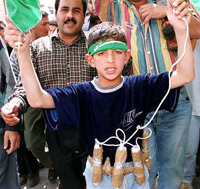 The US military just reported that a former Guantanamo detainee has been identified as carrying out a suicide bombing mission in Iraq. He was a Kuwaiti man whom the US detained in Guantanamo in 2005 and who was later acquitted by a Kuwaiti court of all charges.

Whether the story is true or not, (and it may not be) it is interesting to see the US military trying to counter act the negative press it has been receiving regarding the constantly growing number of prisoners who are reporting wrongful detainment, abuse, torture and even killing. They try to convince us that these prisoners are dangerous and that the US needs to continue to "imprison torture and even kill these people in order to protect others.”

Rael pointed out that the cause should not be considered as the effect. He said:

“The fact that a former Guantanamo prisoner carried out a suicide bombing mission is not surprising at all. Every day, the USA is creating hundreds of new possible terrorists and suicide bombers from the innocent civilians they jail, kill, or hurt. When you are innocent and spend years being abused for nothing in Abu Ghraib or Guantanamo and are finally released without any money for damages, apologies or explanation, or when all your family members or dearest relatives are killed, hurt or raped by the US occupation army, then it is understandable that more and more people decide to avenge or to take revenge for their suffering or their lost relatives or properties and wealth. These days, it is more and more difficult to find an Iraqi family who doesn't have at least one relative who suffered from the US occupation, illegal detention or brutality. The only way out is the ending of this illegal occupation with all US soldiers going back home, the release of all prisoners with damages paid to them. If not there will be more and more of this.”

Politicians and military leaders have always been successful in controlling people through fear tactics like this. Bush was successful at this in 2003. The US military is continuing in the same fashion now. The Prophet Rael has always taught that the only lasting solution to any conflict will always be through nonviolence. Anything else is always only temporary.

As Rael said after 9-11, “the men who flew those planes into the buildings had their reasons. The US had its reasons for going after its attackers. Israel and Palestine have their reasons for attacking one another. Everyone always has reasons. But reason is always wrong. Only love is right”.