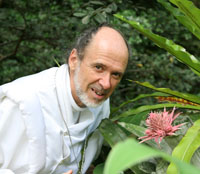 The first Sunday of April has a special meaning for Raelians as it is the day we celebrate the creation of the first Human Beings on Earth. It is even more special in Africa since last December when the Prophet Rael revealed that Adam and Eve were black. This information definetely changed the perception of Africans regarding their role and position in the whole Humanity and since then, hundreds of them are joining us to help the Prophet Rael in his mission. During the celebration, it is also the moment for those who want to be baptized to do. The Raelian baptism is a non-mystical act of recognition of the Elohim as our Creators. And when we say Creators, we mean scientific human beings creating life scientifically as we will do here on Earth very soon, and we are not refering to a creation by a supernatural and mystical power.
Last Sunday, more that 240 people decided to get baptized in Africa, the largest number ever in one day on that continent! Hundreds joined as well from the other continents. You can read more about the different celebration in our Newsletter Contact #304 to be published in a few days.
The Prophet Rael was in Australia that day and welcomed 12 newcomers after giving a one week seminar in a retreat in the Tamborine Mountains near Brisbane.... A real paradise for a week.... At the end of the ceremony, he said a few last words to the Raelians of Australian and New Zealand gathered around him, overwhelmed by the pleasure of receiving his teachings. You cannow listen to that talk on www.raelradio.net.
Search Raelianews
News Categories
Other News
‹ ›