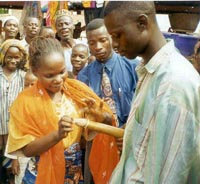 The Raelien philosophy brings very simple and powerful concepts like :” To save the life of one individual is more important than saving Humanity. In other words, if one is told to kill an individual so that its death will save Humanity, we shouldn’t kill that individual as if one agrees to kill one person, then one will find good reasons to kill two or to commit a genocide. If we apply this concept to today’s situation, we are all responsible for a double genocide, seeing this endless war absorb the money that would save millions.

To add to the scandalous situation, some scientists dare to propose to mutilate men and practice circumcision as a solution to reduce HIV infection. Isn’t the most insane proposal? The effective prevention strategies are well known: condoms and sterile syringes but certainly not mutilating. Would Dr Fauci propose soon to remove all the genitals in infected regions to be on a safe side? The whole situation is unbearable.

The World can win the fight if the US and other developed countries decide to send doctors, condoms, syringe and retroviral drugs to Africa and Asia instead of the usual military tanks, weapons and soldiers.