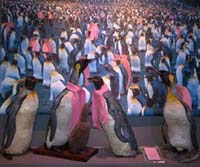 Rael has sent his congratulations to the director of the Natural History Museum in Oslo which inaugurated a new exhibit that shows homosexual behavior in the animal world; it shows giraffes mounting, aroused whales mating and dragonflies copulating - all of them of the same sex.

Homosexual people are often told that their way of living is against the principles of nature. It is refreshing to see that a scientific institution is going against the taboos, showing that homosexuality is very natural and quite common in animal kingdom.
We already published an article about the penguins refusing the females offered to them for reproduction in a zoo, preferring to stay within males, to the dismay of the zoo director hoping to get offspring ;-)
But according to the study behind this exhibit, homosexual behavior has been detected in more than 1,500 species, from beetles to swans and even lions and sperm whales.
Among swans and flamingos there have been cases of two females living together using sexual contact with males purely to reproduce. Big horn sheep "need to have sex with their own fellows just to be accepted. The first documented cases of supposed homosexuality in animal’s dates back to the Greek philosopher Aristotle who, more than three centuries before Jesus Christ, was intrigued by the promiscuity of male hyenas. The subject was then ignored for many centuries, with incidents of male coupling described as part of fighting rituals. The cover-up was well orchestrated by the same who call homosexuals “pervert or deviant”. In Oslo, a Lutheran priest said he hoped the organizers would "burn in hell," and a Pentecostal priest lashed out at the exhibition saying tax payers' money used for it would have been better spent helping the animals correct "their perversions and deviances". There are no perversions or deviances in these animals; they are just following their genetic make-up. And the same applies to the homosexual or bisexual human beings. Congratulations to the exhibition organizer Geir Soeli who didn’t give up to the conservative Christians and who successfully keeps on educating visitors….