our support to President Correa 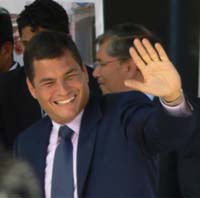 Ecuadorian President Rafael Correa recently refused to pay interest on the nation's foreign debt. He pointed out that Ecuador has paid over $7 billion in interest alone, not affecting the principal whatsoever. He called the debt “immoral and a betrayal of the country” and also said that he is prepared to accept any consequences for the decision if there are international lawsuits.

Upon reading President Correa’s position, Rael commented “All poor countries should do the same thing right now, (refusing to pay) which will accelerate the crash of the world economy, and the creation of a world currency on a healthy basis. Because right now the richest country, America, has by far the biggest debt in the world, but pays the interests by simply printing more dollars everyday while poor countries don't have the right to print dollars while their debt is written in this very "ghostly" currency... This is a sure way to make the poor poorer, while America enjoys luxury with money which has absolutely no real value.”

The Prophet Rael has commented many times in the past that indeed these types of world debts are immoral – especially considering that, in most cases, the “lenders” have stolen land or resources from the “borrowers” in the first place. Among the worst affected are the cultures of Africa, Central, North and South America, Australia (and more) Wherever the British, French, Spanish and Portuguese colonizers went, they stole countless sums of gold, land and resources. There was even a blatant example in 2007 of sunken treasure which was found in international waters. The 400 year old sunken ship was Spanish and Spain wanted the treasure returned, completely ignoring the fact that they had stolen the treasure from aboriginal people. Of course the loot should have been returned to the people from whom it was stolen. Not to the thieves.

We send our support to President Correa and hope all other countries will follow his decision.