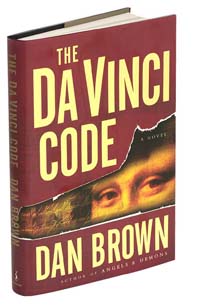 Many questions came to us lately regarding our position on the “Da Vinci Code”, the Dan Brown’s bestseller and now a movie. This book is such a phenomenal success that it has triggered all kinds of emotions in people. Some influential Christian Churches have even tried to stop its publication. The Catholic Church has funded many documentaries to try to counteract the effects of the novel, explaining that Jesus is god and couldn’t have a child…

So what is the position of the Raelian Movement regarding this nice and well built story?

Well, apart from being a nice and well built story, it makes people question their beliefs and what they have been told for a long time. The Raelian Movement always welcomes greatly any publication that has this effect on people, since there are still too many people suffering and dying from the monotheistic dogmas that dictate life on this planet.
But before looking at the educational part of this novel, let’s be clear about one thing: whether Jesus had a child or not is of no interest to us. Jesus was given a message and his mission was to spread it throughout the world. He definitely touched the whole world, and one of his main messages - “to love each other as you love yourself” managed to make it through 2000 years of distortion - this is what matters. The message he tried to convey had ....
..nothing to do with his bloodline, even if he often refers to his father in the sky who was, as revealed in “Intelligent Design”, his real biological father. Jesus is, like Rael, the son of one of our Creators and a woman of Earth. The purpose of this original conception was, as explained in “Intelligent Design” to show that our DNA is compatible with the Elohim’s DNA, as it is said in the Bible : the Elohim loved the women of Earth and had children with them who became the might men of the world. Our Creators are human beings and made us in their own image. Some of their Prophets were conceived like Jesus and Rael, to demystify the human concept of god and focus on the message they had to convey. But people chose to look at the Messengers instead of the Message they brought, they chose to look at the finger instead of looking at the direction it showed. And this is probably one of the most important parts illustrated in the Da Vinci Code : the betrayal of Jesus’ message.
Jesus has obviously been badly betrayed and not by those who are commonly known as traitors, like Judas… We have seen that in the Judas Gospel published lately in the National Geographic, Judas was probably the closest and the most dedicated disciple. Jesus was betrayed later by those who were seeking power and this is well documented now and not a fictitious story made up by a brilliant author.
Bart Ehrman, a professor of religious studies at the University of North Carolina at Chapel Hills wrote: “Once Constantine converts to Christianity, he converts to an orthodox form of Christianity, and once the state has power and the state is Christian, then the state starts asserting its influence over Christianity. By the end of the fourth Century, there is legislation against heretics. The Empire that used to be completely anti-Christian, not just becomes Christian, but tries to dictate what shape Christianity ought to be”. Constantine wanted one god and one religion so that he could assert one Empire and one Emperor. He employed Eusebius to make up the story of Jesus as we know it today so that it looks just the way he wanted it to be.
Some experts now show that the “Gnostics”, the Christians who were declared heretics during the fourth century and after, were actually more humanist, philosophical and feminist and were following a more Christian spiritual path than those who ultimately triumphed.
So, a few gospels made it through, the politically acceptable ones and a great many heretical documents were condemned. Luckily they are resurfacing now so people can have another side of the story and the Da Vinci code definitely helps readers to be more knowledgeable about the real life of Jesus.
Regarding knowledge, the movie starts with a lecture given by the main heroe of the story, a lecture about symbols and how symbols of the past had their meanings distorted. I was so pleased to see the swastika shown on Buddha’s chest as we can see them in many temples in Asia. The swastika is a symbol of happiness in Buddhism and, for the Raelians, it represent the Infinite in time…. Certainly nothing to be scared of!!
A big place is also given to Mary Magdalene in the novel and to a possible marriage between her and Jesus. Were they married? Was she his favorite disciple? Did they have a child together ? Raelians just don’t see it as a relevant matter – it is so unimportant compared with the message Jesus brought. He was certainly living like a human being, enjoying the multiple pleasures of being alive. He was also the great spiritual leader who educated his disciples and we are convinced that there was no gender discrimination on the part of Jesus back then. Mary Magdalene and other women could have been one of the main disciples, as is the case with every one of the Prophets. One story told about Joseph Smith says that he was killed because he refused to give in to some influential members who wanted to refuse women in their temple?
But this is the past, this is history and Raelians want to focus on the present, and build the future.
The Messages of the Prophets have been distorted, let’s spread the new message given to us through the last Prophet, this is more important than anything else as it is saving lives every day. Every day, people are finding hope in the fact that there are dreamers like the Raelians who believe it is possible to live in a better world where science and love guide the men and women in power, instead of the fear or guilt emotions induced by the distorted philosophies of the past.