Hopefully a severe punishment ahead 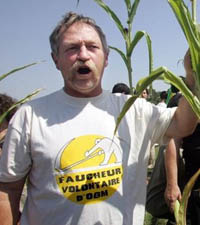 Former French presidential candidate José Bové is facing charges which originate from a November 2006 episode called a “genetically-modified organism tracking” operation. He and a group of “voluntary reapers” contaminated some of the 2,000 tons of genetically-modified corn contained in a silo on a GMO farm in southwest France.

The Prophet Rael expressed his and many peoples’ hope today when he said “Let's hope that the French justice system will punish these anti-progress and anti-science criminals as severely as possible in order to set a final example dissuading any individual from retarding the only process able to feed all humanity. These people remind us of the people of the past centuries protesting against railways or cars as "vehicles of the devil" or against medicine as "contrary to god's will".

As we have said before, it is easy for fat politicians in countries thousands of miles away from starving millions to tout anti-GMO messages. Their stories would, however, change drastically if they or their families were among the starving. Imagine global warming is real (this is another topic, though) and the weather patterns change so that these rich countries can no longer grow crops. We’re sure these politicians would change their mind about GMOs. What’s worse is that they almost never understand that a huge portion of the food they are eating has already been genetically modified by a huge number of select cross-breedings over the last centuries – not to mention these foods are now bathed in pesticides, thanks to the need for profit…pesticides which are adding to the declining level of health they are supposedly so worried about.

You can see several articles on the Raelian position regarding GMOs archived here on our Raelianews site. These really are the only answer to the hunger problem on Earth and anyone who retards their progress is perpetuating starvation. If we are truly compassionate toward the millions starving, we are obligated to furthering genetically modified crops.