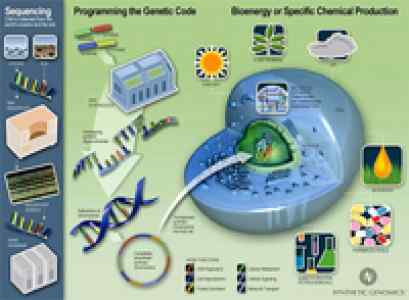 “Today is an historical date,” declared Rael, leader of the International Raelian Movement, in a statement released this morning.

“Today is an historical date,” declared Rael, leader of the International Raelian Movement, in a statement released this morning. “With Venter’s achievement, we’re witnessing the first step toward the Elohimization of humanity that will bring the creation of the first synthetic human being.”

According to the Raelian philosophy, the Elohim are the advanced extraterrestrial scientists who created all life on Earth, including people.
The announcement made by Craig Venter and his team at the Newseum today has been anticipated by Raelians worldwide, for Rael explained 35 years ago that we were created by human beings from another planet and would one day be able to create life ourselves.

Venter described his engineered cell as "the first self-replicating species that we have had on the planet whose parent is a computer."
“The creation of the first cell controlled by a synthetic genome as described by Venter and his team shows the entire world that life isn’t the mysterious gift of a hypothetical god,” said Dr. Brigitte Boisselier, spokesperson of the International Raelian Movement. “Instead, life is the result of an intelligent design, meaning a scientific design.”

She added, “Our mission now is to make sure that ethical committees understand how inevitable it is to create synthetic human life. That task might be more difficult than the creation itself.”

Rael anticipated Venter’s accomplishment in a speech he made several years ago. Some excerpts: