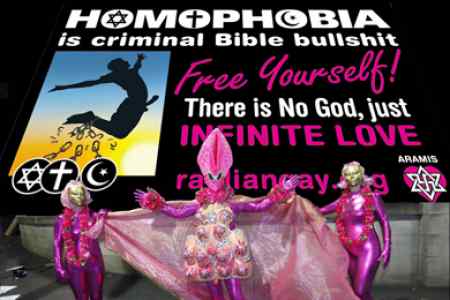 Dear Michael and Board,
Thank you Michael for your recent letter outlining the specific “What Mardi Gras won't do” and “What Mardi Gras will do” clauses, which are the reasons for rejecting the ARAMIS (Raelian Association of Religious Minorities) Expression of Interest in the Parade.
Admittedly the proposed slogan “HOMOPHOBIA is criminal Bible bullsh*t”, was also rejected last year, but the Raelian Movement had positively hoped that enough changes had taken place both inside Mardi Gras itself and the socio-political scene in Australia and internationally to highlight the salient need for free expression of GLBTQ communities’ concerns about religious homophobia.
Benedict XVI in his recent Christmas message once again condemned gay peoples and denounced same sex marriage as a manipulation of nature. He claimed homosexuality was destroying the very “essence of the human creature.” Whilst many people see the Pope of Rome as a joke these days he still has an unfortunate and powerful influence on opinion and decision-making. Ironically his supporters also seem to influence Mardi Gras, despite the pope’s slanderous, discriminating edicts against homosexuals and transgender peoples and the formation of a Royal Commission to investigate pedophilia within the Church.
According to the head of the Christian Lobby, the Australian Prime Minister, Julia Gillard recently assured religious groups they would have the ''freedom'' under a new rights bill to discriminate against homosexuals and others they deem sinners. The federal government is also proposing anti-discrimination laws that would leave transgender people vulnerable to discrimination.