Interview given to the New Tork Times 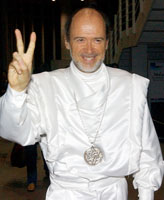 I know you are from the fashion department and I was so happy when you contacted me because here on this planet, we (raelians) have big struggles, such as like for peace, non violence, but there are also small fights and one of them is fashion. I think there are links between all the subjects in the world, between the big subjects like peace, non violence, and smaller ones like fashion, the terrible human fashion, the politically correct fashion.
What I mean is that in the whole history of humanity, men have been wearing elegantly designed clothes, remember how the aristocrats were dressed, in the 14th century up to the 17th century. But suddenly appeared the suit and the neck tie. You can say it is ok, but for a short period of time. However it has been now for 1 century that men have been so ugly dressed with productivity clothes. It came with industrialization, with democracy, all these kind of ideas among which some are good. But then everybody wanted to look the same. It was supposed to be progress, but to have everybody looking the same is not progress. It is the opposite. Everybody must be different.
More..
Search Raelianews
News Categories
Other News
‹ ›