In his recent remarks to a synod of African bishops, Pope Benedict reportedly said that although the period of colonialism is over, the developed world is still exporting "toxic spiritual rubbish" in the form of materialism. 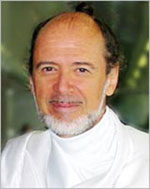 In his recent remarks to a synod of African bishops, Pope Benedict reportedly said that although the period of colonialism is over, the developed world is still exporting "toxic spiritual rubbish" in the form of materialism. He also referred to an "urgent" need for Catholic evangelism in Africa to combat this new form of colonization.

"What's urgently needed is exactly the opposite," commented Maitreya Rael, spiritual leader and founder of the worldwide Raelian Movement."What Kama [the original, pre-colonial name for Africa used by its native inhabitants] really needs is large de-baptism campaigns to remove people from the influence of the colonizer religions, especially Christianity. "

He said that although political the decolonization of Africa has been "partially accomplished," the spiritual counterpart of that liberation has yet to occur.

“The need for spiritual decolonization is what's urgent," Rael Maitreya said. "The people of Kama must apostatize from Christianity, a religion that insults the memory of their ancestors. Those ancestors can't rest in peace because they're watching their descendants practice the religion of the colonizers, who forcibly conquered them through bloodshed and made them convert to Christianity the same way."

He urged Africans to return to their pre-colonization religions after renouncing Christianity.

"This is the only way they can please their ancestors, who are watching them," Rael Maitreya said. “The spiritual decolonization of Kama is an indispensable condition for the future development of this continent. Mao Tse Tung understood this principle; he launched the cultural revolution that was necessary to bring China to the superpower status it now enjoys."

The Raelien philosophy, which has many followers in Kama, explains that all life on Earth was created scientifically by human scientists from another planet. Most pre-colonization religions confirm this Raelian explanation of our origin, for they speak of "those who created us and then returned to the stars."