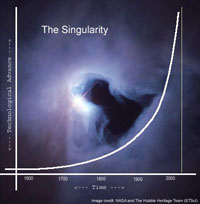 “All attempts to predict the future in any detail appear ludicrous within a few years.” (Esteemed scientist and science fiction author Arthur C. Clarke, writing in the 1983 introduction to his updated edition of “Profiles of the Future,” first published in 1962)

Sir Arthur got an amazing number of things right in his very long lifetime (he died last year at the age of 90), but he got this wrong. In the early 1970s, someone did accurately predict – in considerable detail – the future we’re living right now.

That someone was Rael. And he didn’t only forecast the wonders we’ve been enjoying for the last dozen years or so. He also described – again in considerable detail – the even more amazing marvels yet to come, as humanity approaches the time of Singularity around 2025 to 2035.

(If you don’t know what the Singularity is, check out Ray Kurzweil’s “The Singularity is Near,” published in 2005. Kurzweil, described by Bill Gates as “the best person I know at predicting the future of artificial intelligence,” also maintains an excellent Web site, www.KurzweilAI.net, where he posts updated information on all the latest technological developments. Visit that site and you’ll find yourself reading reports about the very things Rael predicted more than 30 years ago!

So what developments did Rael predict that Arthur C. Clarke didn’t? Here’s just one example (the underlining is mine):