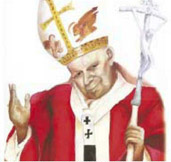 Pope John Paul II has launched a new book in which he controversially compares abortion and the Holocaust saying that both abortion and the mass murder of six million Jews came about as a result of people usurping the "law of God" beneath the
guise of democracy.
The Prophet Rael made the following comment today: The criminal catholic church leader dares to compare the tentative of genocide against a minority carefully premeditated by the nazis with the individual choice of women of all races who just use their individual freedom to decide when or if they want or not to have a child. In other words he says that every woman deciding to have abortion is like a little Hitler. How can catholic women stay catholic and not apostasy (debaptize themselves) from the catholic church after such a statement?