a partial infinite is still a progress 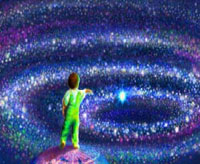 The Nasa's Wilkinson Microwave Anisotropy Probe (WMAP), launched on 30 June 2001, has been since then taking the temperature of big bang afterglow, known as the "cosmic background radiation". If the standard big bang picture of the Universe is correct, the blotches and freckles should be scattered randomly about the sky. "The big surprise is they are not," says Chris Vale of the University of California at Berkeley. "The quadrupole and octupole blotches are aligned with each other - along what they call “the axis of evil."
According to some scientists like Joao Magueijo at Imperial College in London, who coined the term "the axis of evil", there may be something seriously wrong with our big bang models.

Big bang models come out of Einstein's theory of gravity. The only way theorists can apply the hideously complicated theory to the Universe is to make two simplifying assumptions. One is that the Universe is roughly the same in all places, and the other is that it is roughly the same in all directions. But if the Universe is the same in all directions, as the big bang models require, that means that the hot spots and cold spots in the afterglow of the big bang should be randomly splattered about the sky - the big temperature splotches and the small temperature goose pimples should have no preferred direction. The fact that they are aligned along the axis of evil leads Magueijo to suggest that maybe the assumptions behind the big bang models are wrong. In other words, the Universe is not the same in all places or directions, but has a special direction.
What they are saying is that Universe is infinite in two directions but in the third one, it is only about 20 billion light years across - the diameter of the observable universe.... 
Very funny and very stupid... But a partial infinite is still a progress and at least scientists are starting to doubt the big bang.
One of the most important teachings of the Prophet Rael, teachings given to him by our creators, is the fact that the Universe is in infinte in space and in time... which makes much more sense than thinking that the Universe has a limit, because if it does, it must be hanging in nothing.... if it is hanging in something, then it is not a limit anymore.... think about it :-)

The HWAP’s team received a 5 year grant to find out whether the instrument was wrong and got wrong data... let’s hope that in 5 years they will get the thirrd dimension of the infinite.... until they got the fourth one, the time one