Griffin as the right to state she is atheist 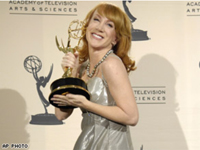 As you probably saw on all the front page internet news, Kathy Griffin cause quite a stir for simply giving herself credit for her Emmy award.

Kathy playfully exclaimed: "A lot of people came up here to thank Jesus for this award. I want you to know that no one had less to do with this award than Jesus. Can you believe this shit? Hell has frozen over. Suck it, Jesus, this award is my god now!"

Ms. Griffin’s comment was condemned by many Christians, including Catholic League President Bill Donohue, who called her words a "vulgar, in-your-face brand of hate speech." How can it be hateful for a person to tell an audience they feel they did a good job and deserve the award? But thanks to pressure from Christian groups, the TV Academy may censor her opinion simply because many, many Christians cannot tolerate the idea that someone can hold a different opinion than theirs’.

When told of the event, the Prophet Rael said; “Censoring that is like saying that all artist must be Christians which is pure religious discrimination”.

He added, “Griffin’s remarks were in no way intolerant, as Donohue and some of the news anchors are claiming. The situation is in fact exactly the opposite. Griffin didn’t suggest denying Christian artists the right to thank God or Jesus for their awards. All she did was state personal beliefs regarding her own award. It’s people who have a problem with that who are intolerant, not Griffin. It’s she who is being discriminated against if her acceptance remarks are censored or conveniently edited out of the final program when the Christian acceptance comments thanking Jesus or God are left in.”

Christians don’t seems to understand that we atheists constantly hear “I’d like to thank God…Jesus” during every Grammy, Emmy, (and every other) ceremony as well as thanking God or Jesus for touchdowns, 3 point throws or the boxer who was able to beat the senses out of his opponent. We don’t think a god would have the time to manage sporting events, actors’ careers, hurricanes, tornadoes – or even people who fly airplanes into buildings or invade other countries like Afghanistan and Iraq.

There is nothing wrong, mean or evil in an atheist stating their beliefs as loudly as Christians claim theirs. It is our right. It’s even our duty! Raelians happen to choose a religion which does not believe in a god. Are you surprised? As you will read in Intelligent Design – Message from the Designers, (free download on this site) Raelians understand that even the Bible is an atheistic book. Surprised again?  Read and it will become clear. ;-)

It will be interesting to know if even one word of her atheist belief is censored out of this program. If it is, the US will be one little step closer to the “Talibanization” the Prophet Rael warns about in other articles on this site.