Amish forgiveness, a beautiful lesson for all

Imagine if Bush had done so... 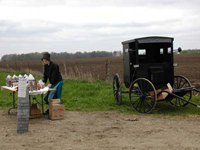 The story was not in the headlines but it was one of the most beautiful stories one can imagine in the world in which we live.
An Amish community that lost five girls in the tragic schoolhouse shooting massacre – which was of course on the headlines last year- just announced that an “unspecified amount of money” would be going to Marie Roberts, the widow of the gunman, who had turned the gun on himself, leaving her and their three children in a surely difficult situation.
This Amish community has set a most beautiful example, clearly showing their understanding of the values of forgiveness and compassion taught by their Prophet. It’s a deeply moving action and one of which surely Jesus would approve.
In a statement released a few days ago, the Amish community expressed its decision to not “become a hostage to hostility”. Isn’t it the one and only solution to stop any fight, whatever its size? Many of the countries that have a self-declared Christian as President or Chief of State, are today involved in “retaliation” wars, ignoring the great principle taught by Jesus which says to never answer violence with violence.
Imagine just one second if Bush had offered his help to the Palestinians instead of sending bombs to Afghanistan as an answer to the 9/11 event? The world would be so different… and the USA would be much more secure than it is now as no one wants to fight someone who is just giving love. Rael has been describing this for several years now – see previous articles related to war on terror-. After a few years and a few thousands young people killed, forgiveness and love is still the only solution, the one so beautifully taught to the American public by this Amish community.