Women the Majority in Rwanda Parliament

men have shown their bloody incompetency for too long 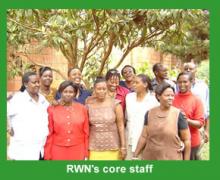 For the first time ever, a country has more women in its government. Rwanda now has 44 out of 80 Parliamentary seats filled by women. :-)

Following the terrible genocide a few years ago, Rwanda’s constitution guarantees at least 30% quota for female members but it appears that the Rwanda population likes what’s happening because the numbers will likely climb even higher soon.

The Prophet Rael was quite happy with this news and said: “Wonderful! Africa is showing the way for the rest of the world. As there are more women than men in all countries around the world, it should be the same everywhere. After the terrible violence that male power did in Rwanda it's more than normal that women do not want men ruling any longer. Men have shown their bloody in competency and must be replaced by women, who, giving birth know the price of life and will bring more feminine values to the society. After following badly the terrible example of macho colonizers, Africa is, in fact, going back to a long tradition of societies ruled by women - and this African example should be followed everywhere, including in USA and Europe where women who are tired of Bush and Blair war policies should replace them and enforce ‘peace and love societies’ devoting the huge amount of money wasted in weapons and wars to scientific research and education.”

Rael has given a series of recommandation for the African continent – which name should also change back to “Kama” instead of “Africa”, which was only the name given to it by those who colonized and robbed it of its financial and cultural wealth. You may see them all on www.raelafrica.org or in a few articles on this sit.