Latin American countries should be the ones doing it 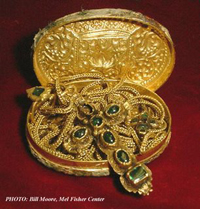 $500 million in sunken treasure has been found in the North Atlantic. Spain claims that the there is a lot of evidence that the sunken ship was a famous 19th-Century Spanish galleon by the name of the Nuestra Senora de la Mercedes and as a result, all the found treasure should rightfully belong to Spain. Spain feels they can prove the ship was Spanish so its lying in international waters should make do difference.

The Prophet Rael commented on this news with his usual clarity. :-)

“If Spain dares to claim this treasure, so should do Peru, Venezuela, Mexico, and other Latin American countries, because the gold transported by Spanish galleons was evidently pillaged from these countries as well as hundred of thousand of metric tons of gold, silver, diamonds etc. during the colonization of South America and the genocide of the Inca, Aztec and Mayan cultures. So if Spain can prove that the vessel was Spanish, then for sure they also have an historic record from which country this gold was pillaged and the Latin American nations should be the ones having the right to claim it - not the criminal Spanish colonizers and conquistadores who stole this treasure and killed millions of people in the process. The Spanish government should also be prepared to pay damages for all the other treasures stolen.”

What could make more sense? Let’s say that someone was to steal all your money or possessions and then die on the trip home. Those stolen things should not be willed to the thief’s family. These things should go back to you!