Raelians will be at the Notopope protest 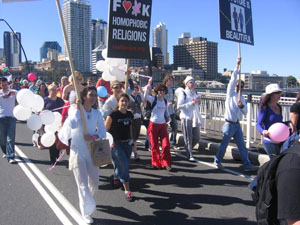 A law recently passed in Australia which will forbid any sort of protests during the visit of the Pope at the upcoming World Youth Day. Absolutely no protest or complaints of any kind will be allowed. Even something as small as wearing a T-shirt claiming the event is a waste of taxpayer’s money would be considered a crime and protester will be arrested and could face a fine of up to $5000…. That would make it a very expensive Tshirt
Another funny part of the law states that the march is not allowed to be anywhere near 500 nearby schools, even though its a Saturday. So irrational! They clearly voted it in a hurry:-)
Jarel who is the leader of the Australian Movement explained that Raelians are members of the Notopope coalition (see notopope.com) which intends to protest the visit of the pope. He said:
“For your information this ban is directly linked to our protest. Following the application for the protest to the police by the coalition Notopope, an inspector came and asked what we have planned to organize so as to "better protect us"...
The coalition hasn't received the authorization from the police yet but instead the law was voted in a hurry banning the distribution of condoms that the coalition was planning plus other things.”
Such a despicable maneuver ….
Rael immediately suggested “It is time for all Australians who love their freedom of speech to prepare anti-pope banners and go into the streets on this day. It is a question of numbers. If thousands of people actively protest these anti-freedom laws then the police and government will not be able to do anything."

It’s not acceptable that people are not allowed to protest anything – much less the fanatical and harmful stance of the Pope on such matters as condoms, AIDS, homosexuality etc. Not to mention that Ratzinger was the one in charge of burying all the pedophile priest cases under the last Pope. :-( …
“The NSW State Government would be impeaching on the Human Rights Declaration by choosing to go ahead and arrest free civilians.” Says Jarel. “These are bully tactics, and we won’t stand for it” . Raelians will definitely be protesting on June 19th and hope you will be many to stand up for the right to protest the huge budget spent to welcome the last dictator of Europe, the leader of an organization that is responsible for the death and suffering of millions in the past and which is still doing so considering its position on condom and Aids and of course the numerous cases of pedophilia due to the policy on no-sex for the priests that transform them into monsters… So many reasons to express ourselves on the 19th and hopefully protect the youth on this youth day:-)