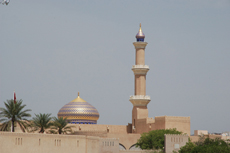 Debate surrounding a proposal to ban construction of minarets in Switzerland is something Swiss Raelians are following very closely. They deplore the fact that the heart of this controversy has been sidetracked by focusing on physical towers and minarets when the real debate is the philosophy behind these symbols.
“Those supporting the proposed minaret ban are the very same people who refuse to serve Raelians in bars, or to rent them conference rooms,” said Chris Antille, spokesperson for the Swiss Raelian Movement. “They are also the same people who deny Raelians the right to organize philosophical debates, and they have even refused our spiritual leader, Rael, the right to reside in Switzerland!”
Antille said such denial of fundamental rights constitutes a violation of basic freedoms guaranteed by accepted international accords.
“Although the Raelian teachings are in perfect harmony with the Declaration of Human Rights, the Swiss authorities refused Rael’s right to stay on Swiss territory,” he said. “To justify that refusal, they used the pretext that Rael’s teachings ‘could cause a public disturbance.’ ”
Nothing could be further from the truth, Antille said, adding that those who actually do present just such a risk are not singled out.
“If there is one philosophy that totally contradicts the Declaration of Human Rights, that philosophy is Islam,” Antille declared. “Rather than attack the Raelian philosophy, which advocates non-violence, the Swiss government should demand that Muslims living on Swiss territory remove those parts of the Koran that promote racism, discrimination and violence.”
[He went on to cite several examples taken directly from the Koran. See below.]

In a speech given in 2006, following events linked to some controversial caricatures of Mohamed, Rael described what the International Raelian Movement has called “a pronounced lack of reciprocity in terms of basic human rights.” Here is what he said:
“It’s shocking to see Muslims imposing double standards in our modern societies. For example, they request the right to build mosques in the West, and to preach in them so they can convert a maximum number of people to their religion. And all citizens [in the West] are free to convert to Islam.
“But in Muslim countries, construction of churches is forbidden, and anyone preaching a non-Islamic religion is guilty of a crime punishable by a long-term prison sentence. Those who convert to another religion – thus apostatizing from Islam – can be sentenced to death.
“These are double standards. As long as absolute reciprocity [concerning freedom of religion] is not adhered to, Muslims should not benefit from the freedom in Western countries that they refuse to visitors in their own countries. Therefore, for as long as it remains illegal in Islamic countries for atheists and those of other religions to proselytize, Muslim proselytizing should likewise be forbidden in Western counties.”
In the same speech, Rael also described the fanaticism that certain Muslims develop when applying teachings of their sacred texts.
Only one solution can counter the extremism that breeds violence and hate, he said.
“Forbid any religion that teaches violence or racial and ethnic hatred,” Rael declared.
He added, “We would never accept a political party that advocates such hatred, and it would be immediately forbidden. Why then accept such a position from a religion, which conditions the behavior of younger generations far more than a political party does? We must therefore forbid the Islamic religion as long as Muslims continue these horrible teachings that are internationally illegal.”
In a statement released on Tuesday, the college of Swiss Raelian Guides asked that Swiss authorities and Swiss citizens “start acting less like cowards and more like representatives of a responsible state that guarantees fundamental freedoms.”
The remainder of the statement stated, in part:
“To be ‘politically correct’ in Switzerland right now means defending the right of Muslims to build minarets while at the same time attacking cults and refusing them use of conference rooms. This position obviously discriminates against philosophical movements not dating from the Middle Ages.”
The Swiss population should unite and request that all religious texts promulgated on Swiss soil be validated by an independent committee that would assess such texts in terms of their accordance with the Declaration of Human Rights. The committee would then issue recommendations based on those assessments.
If Swiss Muslims agree to follow the committee’s recommendations, they could thereafter benefit from all rights and privileges granted to Swiss residents. But if they refuse to comply and continue to condone the practice in Muslim countries of denying freedom of religion within their borders, then reciprocity should be applied and the practice of Islam should be forbidden on Swiss territory, including all symbols of this religion, such as the minarets.
For more information about Rael’s position on militant Islam (which of course is also the position of the International Raelian Movement) see: http://fr.raelpress.org/comment.php?comment.news.75
*Here are a few of the more explicit extracts from the Koran, as cited by Antille:
Koran Sura IX .5
“Kill all the infidels everywhere you find them, capture them, besiege them, and create ambushes. However, if they convert, if they give money ….. Then let them go in peace, because Allah is forgiving and has pity on them.”
Koran Sura V, 51
“Oh believers, do not become friends with any Jews or Christians, because they are their own allies. Anyone who becomes friends with them will become like them and God cannot be a guide to such a pervert.”
Koran Sura IV,34
“Men are superior to women, thanks to the qualities which God has endowed on them in order to raise them above women. Reprimand those women whom you fear are not obedient, banish them to separate beds, and beat them.”
Search Raelianews
News Categories
Other News
‹ ›