Our support to Ali Farzat

Tens of journalists are dreaming in Syria to have the right to write freely. 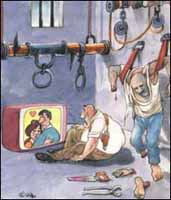 Tens of journalists are dreaming in Syria to have the right to write freely.
Ali Farzat, a cartoonist, is one of them who hasn't been published since his satirical magazine was banned 3 years ago after only two years existence as the frist private magazine in the country. Even if the Syrian government is easing up a little, editors are still very afraid to publish anything that could anger the Baathist in charge of the country for more than 40 years.
Here is an example of Ali's art: an image of man who has been severely tortured. He hangs from a wall in chains, a severed hand and foot lie on the ground beneath him. Amid the chains and instruments of pain, the torturer himself sits watching a slushy romance on television. The torturer is clearly emotionally absorbed in the plot and has a tear rolling down his cheek....


This news item is from Raelianews
http://raelnews.org/our-support-to-ali-farzat.html