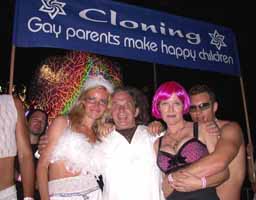 San Francisco Superior Court Judge Richard Kramer has ruled that a law banning gay marriage in the state is unconstitutional and said that the state had no rational reason for limiting marriage to a man and a woman.

We have to remember that last year, California's Supreme Court annulled 4,000 gay marriages, which had taken place in defiance of state law.
The Prophet Rael expressed today his support and admiration to Richard Kramer for his courageous and right decision.

This news item is from Raelianews
http://raelnews.org/california-judge-backs-gay-and-lesbian-unions.html