she has right to free speech 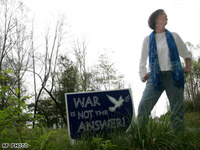 Rael and the Raelian Movement just sent their support to Sally Ferrell, a woman in North Carolina, USA. In her local areas, Ms. Ferrell has been setting up many peace vigils and being a great peace activist in many arenas. More importantly, and it’s causing some noise now is that she has been banned from distributing pamphlets in High Schools which inform students that there are other options than joining the military. She does this in order to counter balance the military recruitment being done in these same schools. The school superintendent has stopped her – stating that it’s unpatriotic. US schools, by the way, usually open themselves to not only military recruiters, they even offer programs called ROTC which prepare young people for military service.

Over the last years, military recruiters have been in a fierce recruitment campaign in order to meet their quota of soldiers for Iraq and Afghanistan. At first, it was pretty easy because of the US government sponsored massive campaigns after 9-11 promoting the necessity for war. The fear tactics worked as they usually do and the US public supported the war. For a while, anyway. Now, however, public opinion has turned strongly against the war and the recruiters have been forced to turn to young, uneducated minds to get them to sign on the dotted line. What is too often missing, however, is the balance. Sally is providing that. The ACLU agreed and got involved and the school super agreed to let Sally into the schools, but only twice a semester. The ACLU is rightfully looking into further action.

The poor fight the wars for the rich.

Not having a compulsory draft for all young men obviously puts the military in the position of trying to make military service look appealing to young people. Not to mention the fact that had Bush put the draft back into action, there would have been a fierce debate regarding women in the military. There would also have been more conscientious objectors which is not good for the war machine. The weak US economy has greatly added to the appeal of military service to young people. How sad to know that young people in the beginning of their lives are so desperate that they risk their lives for the paid education the military provides (with US tax dollars) – if they happen to live. How do we know this is true? Recruiters have a much higher success rate in poor areas. In fact, it’s been the same for thousands of years.

This news item is from Raelianews
http://raelnews.org/sally-ferrell-reeducates-high-school-students.html