those who electd him are accomplices 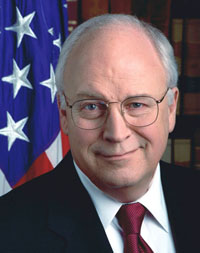 August 27, 2008: Dick Cheney, vice president to George W. Bush, again repeated his stance on how he believes the US should be allowed to interrogate prisoners. While he officially decries torture, he supports Bush’s stance on “alternative” methods of interrogation which include practices condemned by the Geneva Convention. The CIA has admitted using at least one such technique called “waterboarding” which simulates drowning and has been declared as a war crime the world over. There are an increasing number of people who believe that Bush and Cheney should be brought up on charges of crimes against humanity in International Courts for using such techniques.

Yet in one of the most hypocritical statements ever made by a politician, Cheney said “No nation in the world takes human rights more seriously than the United States."

The Prophet Rael made a very interesting comment which affects every person in every democratic country. He said “…if Bush and Cheney were up for re-election, anyone who would vote for them knowing their stance on torture would be held accountable as accomplices of torture on "judgment day " as these men are clearly announcing that they support torture even if they call it "alternative" interrogation methods. It is no different than those who voted to elect Adolph Hitler. Those voting for criminals who clearly announce their illegal intentions as elected leaders are de facto accomplices.”

This news item is from Raelianews
http://raelnews.org/us-vice-president-defends-torture.html