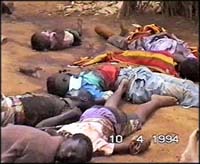 An independent Rwandan commission just released a report which says France was not only aware of the actions leading up to and including the 1994 genocide in which 800,000 people were killed, but that France actively participated in the genocide by helping train the ethnic Hutu militia perpetrators. The report even accused French troops of direct involvement in the killings.

The report went on to name over 30 senior French military and political figures and recommended they all be prosecuted. Among those named in the report were Francois Mitterrand, (the late former president) and the then Prime Minister Edouard Balladur.

After this report, which is no surprise if one reads Rael’s earlier words on the colonization of Africa, he said “Seeing this report, all African countries should cut any and all economic, military or "cooperation" links of any kind with France and replace these with links with other ex-colonized countries like China, India, Venezuela, etc. in a Union of Ex Colonized Countries. Cooperation between the ex victims is the only way for a real development. The developed countries do not really want poor countries to become rich as it would diminish their world domination. To still have French military presence in Africa is an insult to the memory of the victims of colonization and slavery. As long as there are no African troops in France to protect black minorities, the justification of the French army presence by alleging that it s to protect French citizens in case of violence is irrelevant and completely colonialist. It would be much better for Africa to have military and economic assistance from ex colonized countries like China or India which speak the same anti-imperialist language.”

This news item is from Raelianews
http://raelnews.org/france-accused-in-1994-rwanda-genocide.html