Ready for a hug? 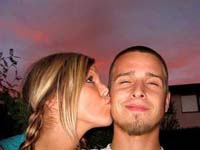 The St. Louis School Board said it followed the student handbook, which states: “Displays of affection should not occur on the school campus at any time. It is in poor taste, reflects poor judgment, and brings discredit to the school and to the persons involved.”

It's unbelievable that such a regulation should exist within a supposed free society!

In Wisconsin, a mother was recently found guilty for telling her children, ages 11 and 15, about her own sexual experiences, giving them an explanation of how to perform oral sex, and showing them a sex toy. According to prosecutors, she exposed her children to harmful descriptions, a felony crime that carries a penalty of up to three years in prison. The woman had to plead guilty to protect her children from having to testify in court! She was later sentenced to probation and ordered to attend counseling.

U.S. schools are telling children not to hug and states are telling parents not to say sex feels good… what’s next?

Well, even scientists can be very biased in the way they portray their studies. Last February a publication in the Journal of Youth and Adolescence stated that youngsters who lose their virginity earlier than their peers are more likely to become juvenile delinquents. The U.S. Congress then used that conclusion to justify a $200 million budget to promote the teaching of abstinence at school.

Luckily, other sociologists took a fresh look at the same data. They found out that if there is indeed a correlation between the two factors, they might both be related to yet another factor completely unrelated to either sex or delinquence.

This situation was explained well in the Washington Post article by Rick Weiss posted below. After reading it, Rael commented that it really had to do with “abstinence fanatics disguised as scientists who try to justify, in the name of science, their Judeo-Christian prejudice against sexual pleasure.”

A recent e-mail received on Raelian News said, “You guys are always talking about sex."

It's true we have articles on sex-related matters such as homosexuality, prostitution, abstinence versus pleasure, and sexual education. But they constitute only a small percentage of our total topics and contents. The site visitor who wrote to us clearly had the same Judeo-Christian prejudice as the authors of the abstinence study, the judge who condemned the mother who talked about sex with her children, and the school board that saw something shameful in a beautiful hug.

The e-mail sender is probably convinced that Raelians are sex addicts.

Well, we ARE love addicts! If a young girl is punished because she hugged someone, we care. If a mother explains how to get pleasure to her kids, we believe there is no harm in that. If scientists slant or make up conclusions to promote sexual abstinence, we denounce that behavior. But above all, we send all these people love and a big hug, since they obviously need it badly!

This news item is from Raelianews
http://raelnews.org/harmful-prejudice-against-sexual-pleasure.html