Our support to Christine Wheatley

Trainee barrister, former prostitute and not ashamed of it. 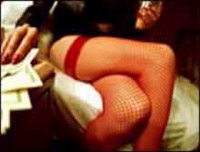 Our support to Christine Wheatley, a trainee barrister, who lost her position in a shortlist to be a New Labour candidate in Birmingham, uk, when the party officials discovered she had been a prostitute in Paris for a few months when she was young.

She said she was no more ashamed of selling encyclopaedias in Germany than her own favours on the Boulevard St Michel.

The Prophet Rael declared today:� This is a perfect example of prejudices� against sex workers. Of course it is so disturbing for conservatives religious people who absolutely want to show that sex workers are always exploited women without�brain ....but somebody who is highly educated and wants to become a politician that's too much for them as it destroys their argumentation and stereotype !
All Raelians should send her their support!

Why would selling our sex be more shameful than selling our hands or our brain. The Prophet Rael reminds us that whatever part of our body we sell, it is prostitution.

For more, you may read the article about Prostitution in the teaching section of this site.