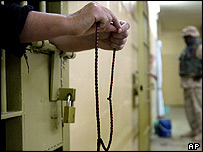 An Iraqi man who was detained and allegedly tortured for 10 months has filed a federal lawsuit against the US company, CACI International, which allegedly carried out this cruelty. CACI is one of the many private companies, like Blackwater, which the US government has had to privately hire to fight this illegal war since so few US citizens are willing to take part in this illegal occupation.

The Prophet Rael commented: “That's the beauty of America. All Iraqi victims of American torture and illegal treatment will finally be able to receive huge monetary compensation, and the criminals behind these actions will be held responsible and have criminal records.

The indictments should include all leaders involved in the transgressions, especially the supreme leader, George Bush. If all Iraqi and Afghani victims sue (and freedom and justice lovers worldwide should help them do so), it will be a huge monetary burden to the American government and a huge number of top U.S. officials will be condemned with criminal records.

For a while, these consequences should prevent any other modern country from using an attack such as Sept. 11 as a pretext for sudden criminal behavior and disrespect for human rights, international law and proper treatment of prisoners of war in accordance with the Geneva Convention.

Such matters are well covered in laws and regulations signed by all countries, including the United States. For not respecting them, leaders responsible for violations -- and that means the president -- should be prosecuted severely and sentenced to prison terms by international tribunal. That's the only way to guarantee that no other modern leader will deliberately decide to treat international accords with such contempt.”

We send our deepest support to Al-Janabi and encourage all others who have endured such things at the hand of the US or any other government to also file suits against such people and organizations.